This post will cover how Google Spanner implements a fault-tolerant two-phase commit protocol and how its novel TrueTime API enables it to guarantee external consistency.

Spanner partitions data across many servers in data centres spread all over the world. It manages the replication of a partition using Paxos, and each partition belongs to a Paxos group. Paxos is like Raft in that each Paxos group has a leader, and the leader replicates a log of operations to its followers. Each replica in a Paxos group is typically in a different data centre.

This setup is great for a few reasons:

Using the example from the linked post where we execute two transactions, T1 and T2, in a database. Let's assume that the database replicates the data across two machines A and B, which are both allowed to process transactions. 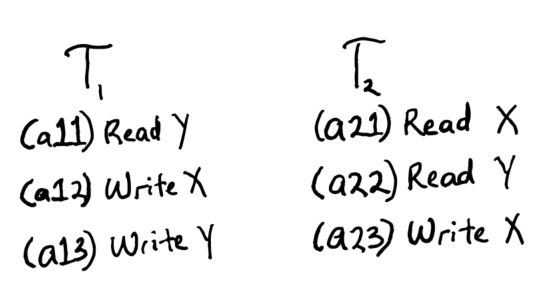 This is because the order where T2 executes before T1 is one of the two possible serial schedules for these transactions:

This scenario could happen if the database uses asynchronous replication, and the writes from T1 have not yet replicated to machine B.

External consistency guarantees that if transaction T1 commits before transaction T2 starts, then T2 will see the effects of T1 regardless of what replica it executes on.

External consistency is challenging to provide #

One reason distributed databases are partitioned and replicated in data centres spread across multiple locations is to allow clients to make requests to the local replicas closest to them, which yields better performance. However, this arrangement makes it harder to provide strong consistency guarantees, as it means that reads of local replicas must always return fresh data. The challenge here is that a local replica may not have been involved in a Paxos majority, which means it won't reflect the latest Paxos writes.

The protocols needed to provide external consistency have performed poorly in terms of availability, latency, and throughput when implemented, which is why many database designers with an arrangement similar to Spanner's have either chosen not to support distributed transactions or to provide weaker guarantees than external consistency.

Spanner tackles this problem by making clients specify whether a transaction is read-only or read-write before executing and making optimizations tailored to each case. The rest of this post will explain how it does that.

Read-write transactions that involve only one Paxos group or partition use two-phase locking for external consistency. The client issues writes to the leader of the Paxos group, which then manages the locks.

The client buffers the write operations that occur in a transaction until it is ready to commit. At commit time, it chooses a leader of one of the Paxos groups to act as the transaction coordinator and sends a prepare message with the buffered writes and the identity of the coordinator to the leaders of the other participant groups. Each participant leader then acquires writes locks and performs the specified operations before responding to the coordinator with the status of its mini-transaction.

The client also issues reads within read-write transactions to the leader replica of the relevant group, which acquires read locks and reads the most recent data. One of the other limitations of two-phase commit highlighted in the previous lecture is its proneness to deadlocks. Spanner uses the wound-wait locking rule to avoid deadlocks when reading data.

By holding locks on the data and ensuring that only the Paxos leader of the partition it belongs to can read or write the data, read-write transactions in Spanner are externally consistent.

Why not read the latest committed values? #

It might seem like transactions must read the latest committed values to guarantee external consistency, but the next example from the lecture shows why this behaviour could violate the property.

Read-only transactions in Spanner use snapshot isolation to prevent the violation in the example.

With snapshot isolation, a database keeps multiple versions of an object—each version labelled with a timestamp representing what transaction produced it. Spanner assigns a timestamp to each transaction using these rules:

Snapshot isolation enforces that a read-only transaction will only see the versions of a record that have a timestamp less than its assigned transaction timestamp i.e. a snapshot of what the record was before the transaction started.

This prevents the problem in the previous example as it guarantees that T3 will see either both of T2's writes or none. Here's another version of the example with snapshot isolation implemented:

In this example, it is okay for T3 to read an older value of y even though there is a newer value because T2 and T3 transactions are concurrent, and external consistency allows either order for concurrent transactions.

But there is another problem that may arise in the example. T3 can read x from a local replica that hasn't seen T1's write because the replica wasn't in the Paxos majority. To prevent this violation, each replica maintains a safe time property, which is the maximum timestamp at which it is up to date. Paxos leaders send writes to followers in timestamp order and the safe time represents the most recent timestamp a replica has seen.

Before serving a read at time 20, a replica must have seen Paxos writes for time > 20, or it will have to wait until it is up to date.

What if the clocks on the replicas are not synchronized? #

Imagine a scenario where the clocks on each replica are wildly different from each other. Remember that these clocks are used to assign transaction timestamps. How do you think that will affect the correctness of transactions? Does your answer depend on whether we are considering read-only or read-write transactions? I'll answer these questions in this section, but I suggest taking a minute to think about them before moving on.

Unsynchronized clocks will not affect the correctness of read-write transactions because they acquire locks for their operations and don't use snapshot isolation. As stated earlier, the locks guarantee external consistency and ensure that the transactions operate on recent data.

But for a read-only transaction spanning multiple Paxos groups, the effect of unsynchronized clocks can play out in two ways:

The next section will discuss how Google uses its TrueTime service to synchronize computer clocks to high accuracy.

Clocks are unreliable in distributed systems. A computer's time is defined by clocks at a collection of government labs and distributed to the computer via various protocols — NTP, GPS or WWV. This distribution to different computers is subject to variable network delays, and so there's always some uncertainty in what the actual time is.

TrueTime is a globally distributed clock that Google provides to applications on its servers. It uses GPS and atomic clocks as its underlying time reference to ensure better clock synchronization between the participating servers than other protocols offer. For context, Google mentions an upper bound of 7ms for the clock offsets between nodes in a cluster, while using NTP for clock synchronization gives somewhere between 100ms and 250ms.

TrueTime models the uncertainty in clocks #

The beauty of TrueTime is that it also models the uncertainty in clocks by representing time as an interval. When you ask for the current time, it gives you an interval that represents what the earliest and latest possible values for the current time are. TrueTime's protocol guarantees that this interval is accurate and that the correct time is somewhere in the interval.

Table 1 below shows the TrueTime API.

From the paper, the TT.now() method returns a TTinterval that is guaranteed to contain the absolute time during which TT.now() was invoked. Note also that the endpoints of a TTinterval are of type TTstamp.

Spanner uses TrueTime to guarantee external consistency through the start and commit wait rules, which we'll look at next.

This states that a transaction's timestamp, TS, must be no less than the value of TT.now().latest. Recall from an earlier section that:

The start rule enforces that the value chosen for TS must be greater than or equal to TT.now().latest.

Let's look at the example below which updates the earlier examples with intervals and the commit wait rule. The scenario here is T1 commits, then T2 starts, and so T2 must see T1's writes i.e. we need TS1 to be less than TS2.

In this example, we assume the database assigns TS1 as 10, which guarantees that C will occur after time 10 due to commit wait. We also assume that Rx in T2 starts after T1 commits, and thus after time 10. T2 chooses TT.now().latest() as its transaction time (start rule), which is after the current time, which is after 10. Therefore TS2 > TS1.

Going back to the definition of external consistency which is that a transaction that starts after an earlier one commits should see the effects of the earlier one, this protocol provides that safety because:

Spanner has inspired the creation of other systems like CockroachDB and YugaByteDB in its use of tightly synchronized clocks to provide external consistency, but its design hasn't come without criticism. "NewSQL database systems are failing to guarantee consistency," Daniel Abadi wrote in a 2018 post, "and I blame Spanner."