Although 'Raft' is mentioned in the title, a better title for this post is 'Concurrency in Go', as Raft will not be discussed until the next post. Also, unlike other posts on this blog, this one will also feature code samples! Examples of good and bad Go code will be shown for building concurrent applications.

Note that although the examples below are in Go, these concepts apply more generally to other programming languages.

Goroutines are lightweight threads in Go. Every Go program has at least one goroutine running, which is the main one from which other goroutines are started. Goroutines execute their functions asynchronously.

In the block below, goroutines are started on line 4 using the go keyword. The for loop on line 3 starts 1000 goroutines, each of which increments the counter variable declared on line 2. 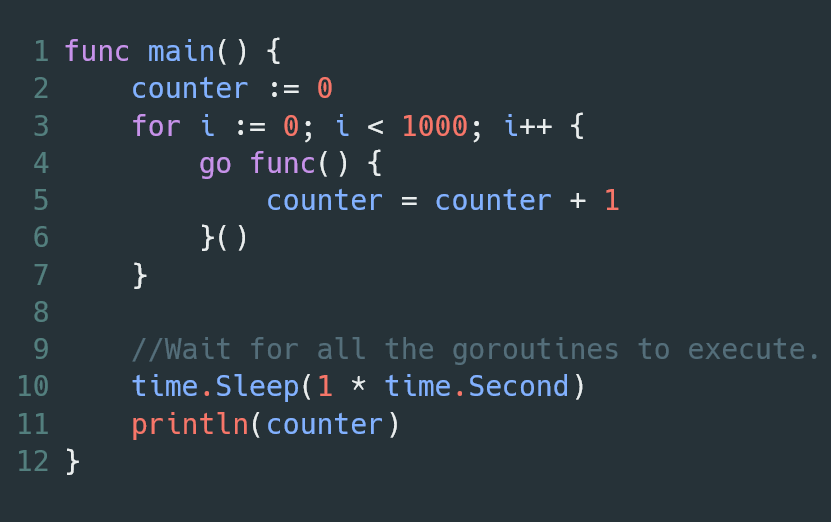 Can you spot the bug?

Go has mutexes, which help prevent race conditions when used properly. Mutexes can be used to protect critical sections in your code. Critical sections are those blocks of code which should only be accessed by one thread at a time. Those blocks will typically involve accessing shared variables, and protecting them is essential in ensuring that your program runs predictably.

In the block below, the variable mu declared on line 3 represents the mutex, and we wrap a lock around the shared counter variable on lines 6-8. 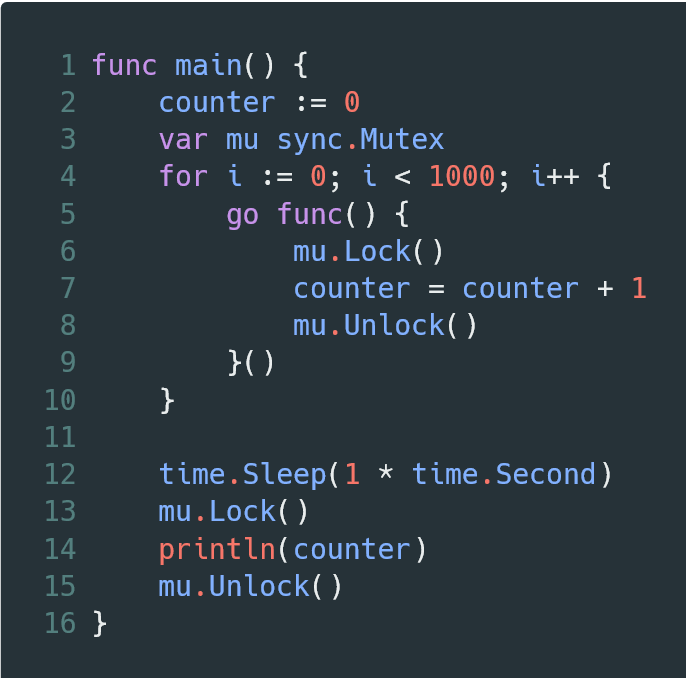 When this program is executed, the final value of the counter will be 1000, as expected.

More generally, use locks when you want to protect invariants in a concurrent application, i.e. properties of your application which should always be true. To explain this, let's look at this example below in which we perform operations for two clients of a bank: Seyi and Yinka.

An author of a program like this will likely expect the sum of the amount in each account to always be equal to 20,000—since any amount removed from one account is expected to be transferred to the other immediately. 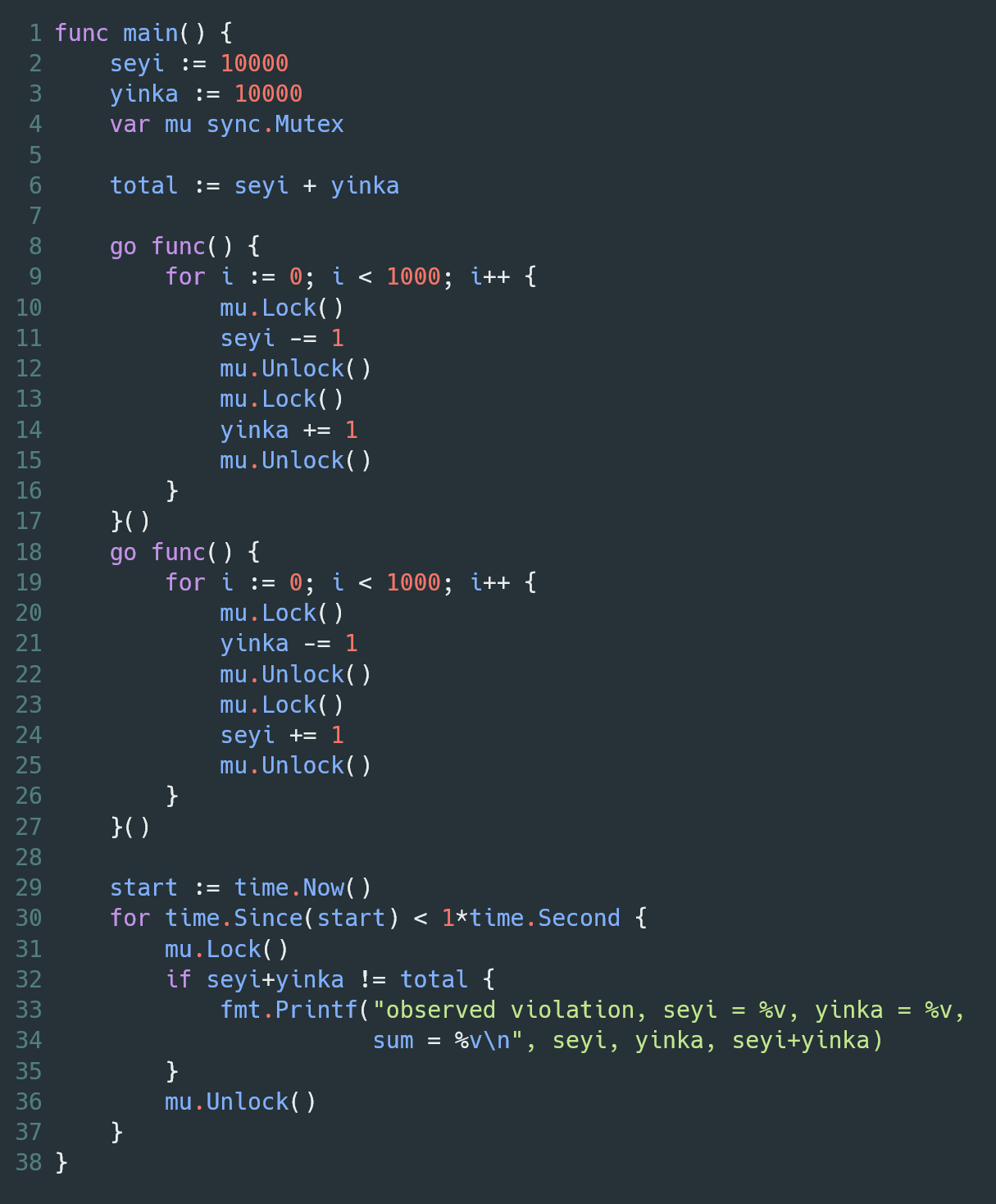 Can you spot the bug?

When this program is run, the code on line 33 will likely be executed multiple times, highlighting that there were multiple periods where that invariant—that the sum of each accounts' value should equal the initial total value—is observed to be violated.

The problem in this example is that although we have placed locks on each shared variable, locks by themselves are not enough to enforce the invariants in our program. If a section of code must be executed atomically (i.e. all the operations in that section must either execute together or not execute at all), then a lock should wrap around that section.

A modified version of the bank example is shown below. In this example, we see on lines 10-13 and lines 18-21 that locks are wrapped around the critical sections, which will help protect the invariants we are interested in. 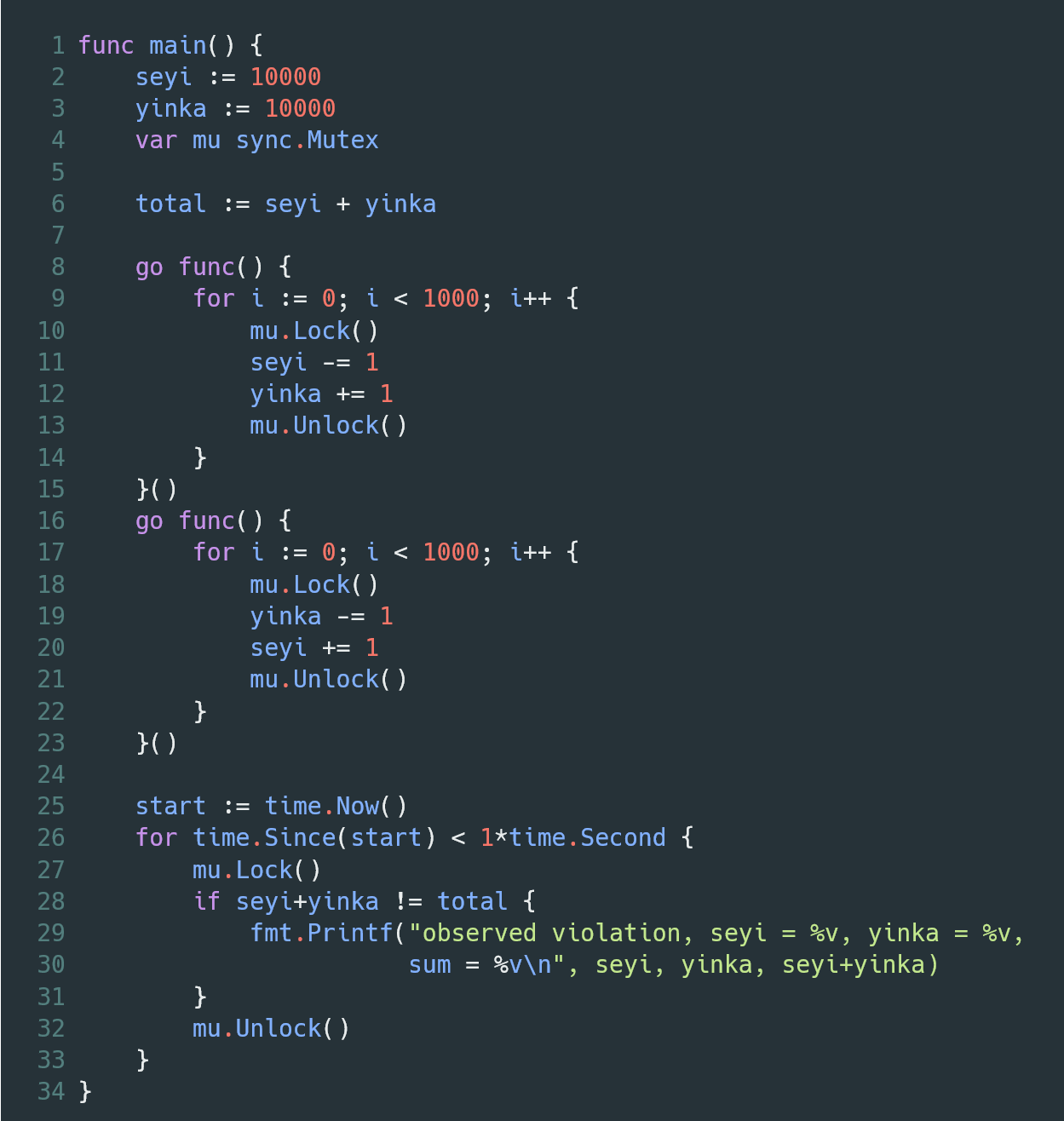 To introduce condition variables, let's consider this example below.

In this program, we have a for loop on line 6 which starts goroutines from the main goroutine and tries to gain votes from them on line 8. If it wins a vote, the shared count variable is incremented. After each vote is cast, the finished variable is also incremented.

On line 18, we have a for loop which will prevent the main goroutine from progressing until it has either won at least 5 votes or all 10 goroutines have cast their vote. 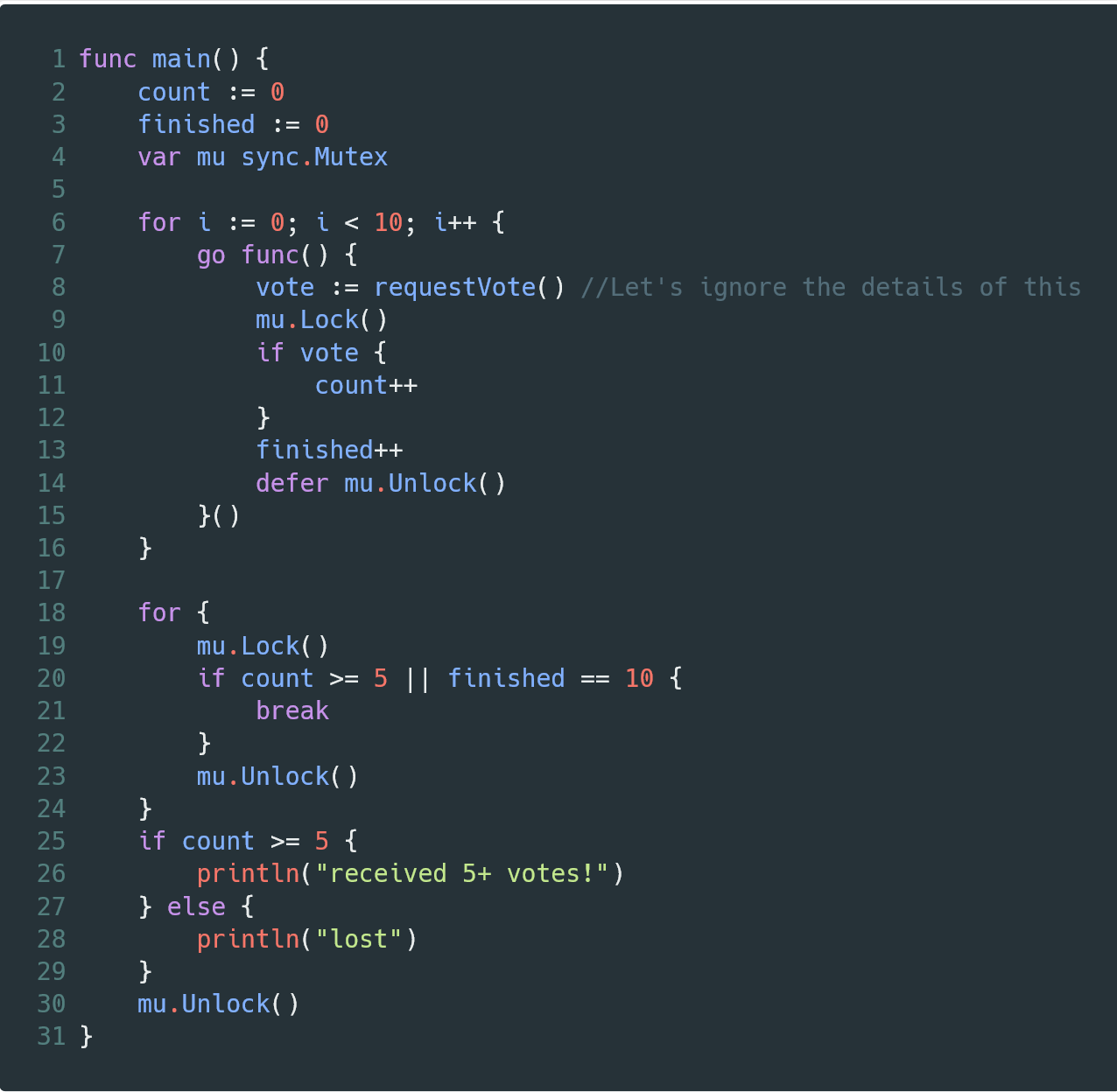 Note that we have placed locks to protect our invariants, and this program will indeed execute as we expect. However, on closer observation, the for loop starting on line 18 is not the best use of the CPU's resources. In each iteration, it will obtain a lock, check that the condition is met and then release the lock. The problem is that there is nothing guiding the number of iterations that the loop will undergo before the break condition on line 20 is met. This means that there could many unnecessary loop iterations which will each obtain access to the shared variable.

This next example illustrates that. 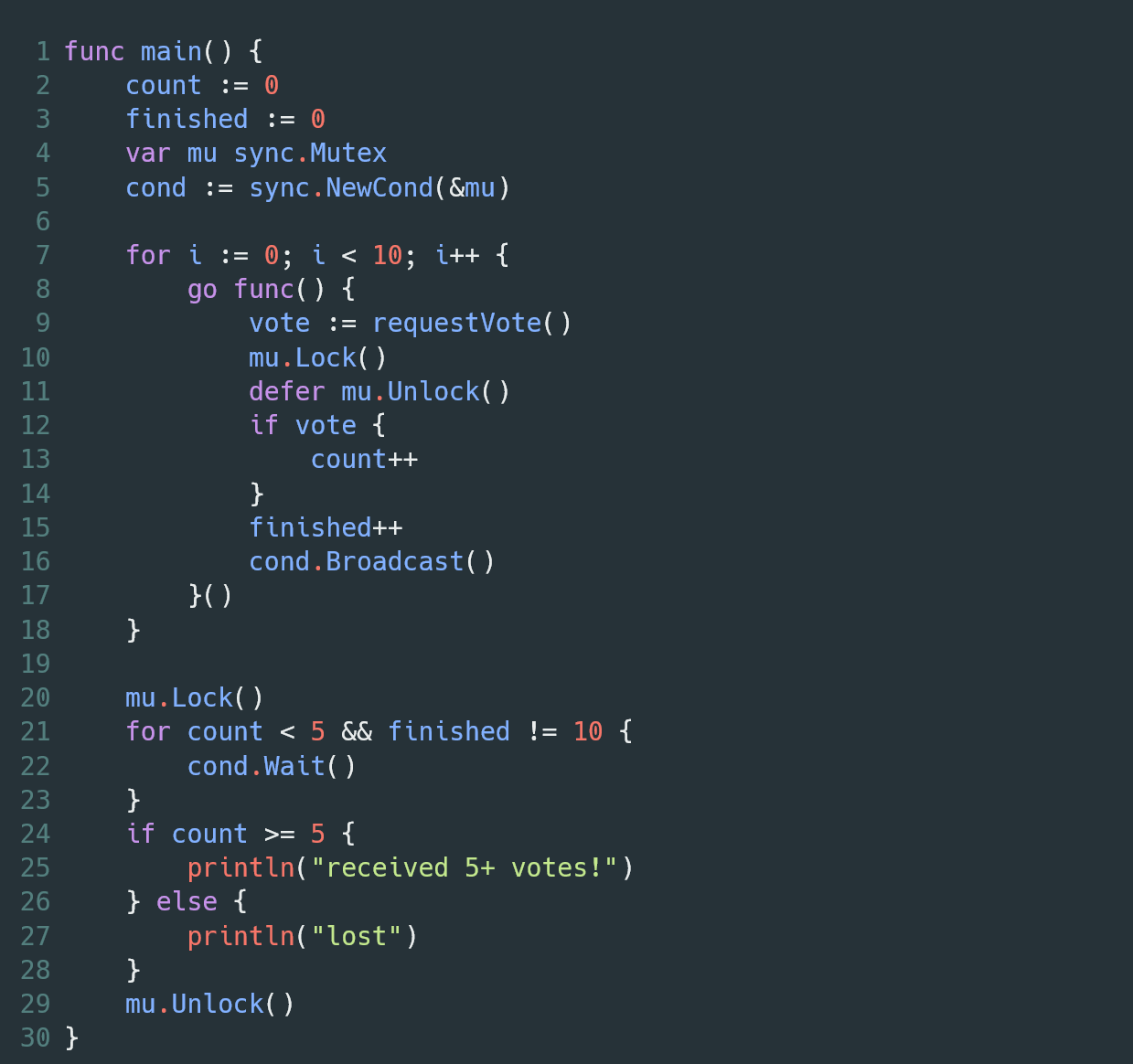 In this example, we have initialized a condition variable on line 5 and passed it the address of the mutex. When the for loop on line 21 is reached and the condition isn't met, we use the cond.Wait() method to pause the execution of the main goroutine. A key thing to note is that cond.Wait() releases the lock being held on mu by the current Goroutine. This execution pause and lock release will happen until the cond.Broadcast() method is executed on line 16.

Any newly cast vote may cause the break condition to be true, and so we use the cond.Broadcast() method to inform all the threads that are waiting on that condition to resume their execution, and try to obtain the lock on the mutex again.

This is a more efficient use of CPU resources than looping continuously without any knowledge of whether the break condition could have been met or not.

The general format when using condition variables is as shown in the pseudocode below. 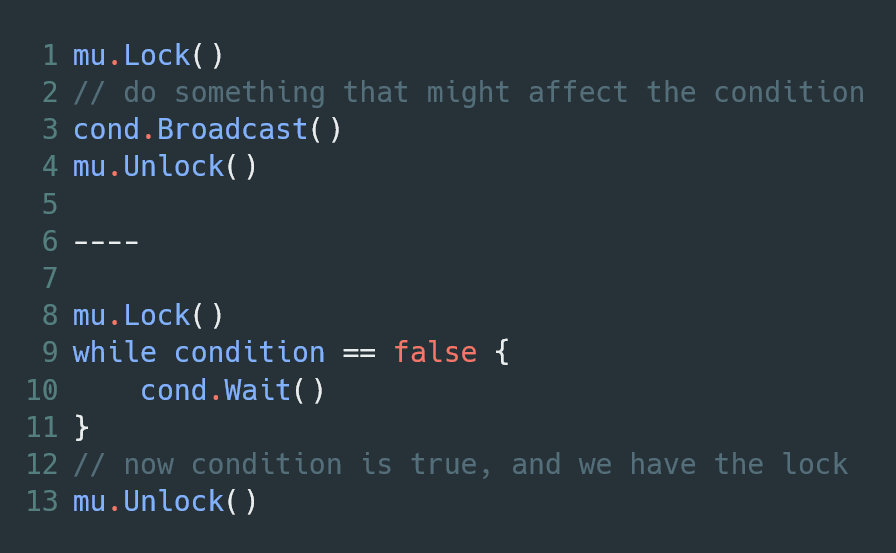 A Channel is a primitive for communicating between goroutines. The general idea is that one goroutine sends a message on the channel, and that message is received from that channel on a separate goroutine.

An example is shown below.

The channel operator is used on lines 5 and 8 to communicate between the goroutines.

Some key things to note about channels in their default usage are as follows:

A major use of channels is for implementing producer/consumer queues.

We have gone over some Go constructs that will help when building concurrent applications. I've had to make use of some of these in working out the labs. If you're interested in learning more about concurrency in Go, I would highly recommend checking out this page on the official Go site.