Bitcoin is a digital currency for making online payments. I'll start this post by making a case for digital currencies, before describing Bitcoin and how it solves the double-spending problem.

Majority of e-commerce activities today rely on trusted third parties like banks and other financial institutions to process payments. These third parties offer some protection from fraud at the cost of increased transaction fees.

But with digital currencies like Bitcoin, two people can make payments directly without a trusted third party involved. These payments rely on other methods to prevent fraud, such as cryptographic proofs. Digital currencies offer several advantages, including:

Digital currencies, however, come with their technical and social challenges. One major technical challenge is in solving the double-spending problem, i.e., how does one prevent a digital coin from being spent more than once?

With traditional currencies, we can rely on banks to prevent double-spending, but different digital currencies have their unique ways of tackling this problem.

Bitcoin is a decentralized digital currency for making payments. Decentralized here means there is no single authority or entity like a central bank on the Bitcoin network. The network is run by many peers, which are computers that collaborate to make any necessary decisions. Anyone can add a peer to the network.

The Bitcoin network comprises coins, each owned by someone. A coin is a chain of transaction records, where each record represents each time an owner transferred the coin to a new owner as payment. The latest transaction record in the chain shows the coin's current owner.

Each coin owner has a public/private key pair which the network uses to verify the integrity of transactions. I'll go over how that works soon, but you can read the previous post on Certificate Transparency or this article on public-key cryptography for more detail.

When the current owner of a coin wants to transfer the coin to a new owner, they create a transaction record which contains:

This information allows the new owner to verify that it received the coin from the right owner. To illustrate this, if a user Y owns a coin that they received from user X, the latest transaction record in the coin will look like: 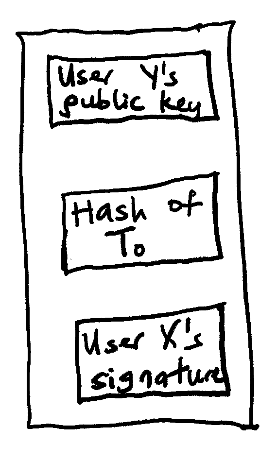 Figure 1: Let the latest transaction be T1, the record will then contain the hash for T0. 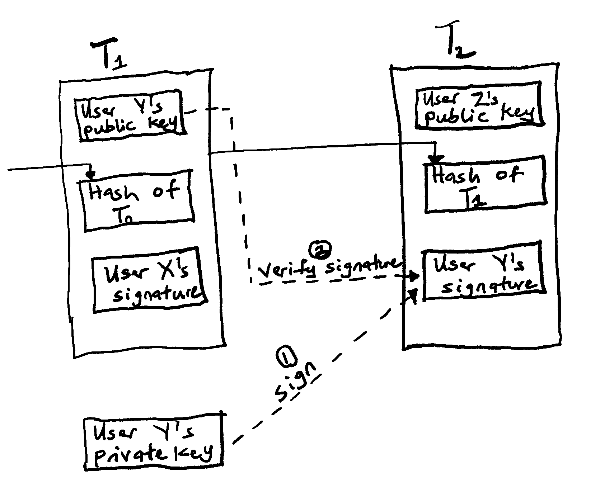 User Z will verify that the coin actually belongs to user Y by checking if the public key in T1 matches the private key signature in T2.

Limitations of the model so far #

An attacker can steal a private key #

As shown in Figure 2, the current owner of a coin uses their private key to sign the next transaction. If an attacker steals the private key from the owner's computer, they can spend the coin. This is a real possibility and is a hard problem to solve.

The current owner can double-spend #

Trusted third parties like banks shine here since they can protect a payee from a double-spending payer. But if Bitcoin is to operate without a third party, a payee needs to know that the previous owner of a coin did not sign any earlier transactions.

Similar to Certificate Transparency, we could introduce a log which all peers must publish transactions to, ensuring that all the transactions in the network are visible to all peers. This log must have the same requirements as a certificate log:

If all the transactions are visible to all peers and no peer can delete a transaction, a peer will detect when a coin has been previously spent on an earlier transaction.

Using the above double-spending example where a user Y attempts to spend the same coin for users Z and Q, these requirements will ensure that if Y->Z happened before Y->Q, then:

One challenge with this log approach is in determining what gets published to the log and in what order. For example, we could have a central log server or a leader that decides the order of transactions like Raft, but this goes against Bitcoin's decentralization goal.

Another way to manage the log is to send new transactions to all peers and have them vote on which transaction to append to the log, with the majority winning the vote. To determine the majority, we could count one vote per IP address, but an attacker can forge IP addresses to claim a majority and vote multiple times. The impact of this will be that:

Bitcoin addresses the double-spending problem by using a blockchain, and I'll describe that next.

The Bitcoin blockchain is a sequence of blocks that acts as a public ledger containing all the transactions on every coin in the network. Each block is identified with a hash and contains:

The challenge posed in the previous section was on determining what gets added to the log. The next section will cover Bitcoin's approach.

When a peer receives new transactions, it collects them into a block. Before it can add the block to the blockchain, it needs to do actual CPU work. This is called a proof-of-work.

To explain this, assume we have a peer S with an unpublished block containing a list of transactions and the previous block's hash. S needs to create a hash to identify the unpublished block using its contents, and that involves solving a hard computational puzzle. The puzzle is this:

Given that peer S has a list of transactions(let's call this l) and the previous block's hash (hp), S must find a value x such that when it applies a hash function to the combination of l, hp, and x, it gets an output that begins with a long run of zeros.

Stated another way, S must find a value x such that:

This value of x is known as the nonce and the difficult process of finding this nonce is called mining.

Finding this proof-of-work for a block is a costly operation as it requires major CPU power, and so this system essentially limits peers to one vote per CPU.

It takes 10 minutes on average for a peer to mine a new block, which means that the parties involved in a transaction have to wait for about 10 minutes before it appears on the blockchain.

A peer broadcasts a block to all peers after finding its proof of work.

When a peer receives a new block, it validates the block by checking that:

The peer validates each transaction by checking that:

If the block is valid, the peer shows its acceptance by working on creating the next block in the chain—using the accepted block's hash as the previous hash.

One possible scenario in the Bitcoin network is that two peers A and B mining the next block in the chain find the nonce at the same time and broadcast the block to all peers, but because of network issues, some peers accept the block from peer A before B's block, while others accept B's block first.

This causes a fork on the blockchain where it now has two branches.

Another possible scenario is that a peer sends one transaction to a subset of peers and another one to a different subset using the same coin.

For example, a peer Y could tell some peers about a transaction Y->Z and others about Y->Q, which both use the same coin. This will create a fork as illustrated below.

Figure 4: There is a fork caused by B6 having two successors.

Peers will abandon the shorter branch #

When a peer receives two different successors to the same block, it will start working on the first one it received but save the other branch in case it gets longer. A branch will get longer when a peer finds the next proof-of-work.

If a peer is working on a branch and sees that another branch has gotten longer, it will abandon its current branch and switch to the longer one. This will also cause any transactions on the shorter branch to get abandoned.

During this period where different peers are seeing different branches of the chain, an attacker will be able to double-spend a coin. But what makes Bitcoin work is that the shorter branch will eventually get abandoned and only one transaction will remain on the blockchain.

This possibility of a fork is why careful Bitcoin clients wait until there are a few successor blocks (typically six) to the one that contains their transaction before believing it was successful. If a block has many successor blocks, it is unlikely that a dubious fork will overtake it.

Where are new coins from? #

When a peer mines a block and the other peers accept it, the peer gets a 6.25-bitcoin reward. This is an incentive for people to operate bitcoin peers.

Can an attacker change an existing block in the middle of the blockchain? #

An attacker may want to do this so they can delete a spend of their coin from the blockchain and spend it again.

The Bitcoin network prevents this by the fact that the block's hash will change if you delete a transaction, and so the previous hash in the next block will be different, which the peers will detect.

Can an attacker start a fork from an old block? #

If an attacker wants to double-spend a coin, they may start a fork from the block that precedes the one with the first spend of the coin and mine new blocks until the forked branch is the longest branch of the chain.

For this to be successful, the attacker must have enough CPU power to come from behind and mine blocks faster than all the honest peers.

If the attacker can create the longest branch, everyone will switch to it and so the attacker can double-spend a coin. But if an attacker has that much CPU power to mine blocks faster than all the honest peers, they might as well use it to generate new coins instead of reusing an old one.

There's a lot more to learn about Bitcoin and I've offered a one-sided view so far, but my goal here is to present an idea of how it works. Some downsides of using Bitcoin are that the proof-of-work takes too much power and the 10-minute confirmation wait is too long, among other points.

In summary, having an auditable public ledger is a great idea, especially in building open systems. Extra points if there are incentives in place to keep people honest.