A Library for Incremental Computing

Late last year, while working on my C++ series and on the lookout for a project to build in C++, I came across "How to Recalculate a Spreadsheet", which inspired me to build Anchors — a C++ library for incremental computing.

I highly recommend reading the post on lord.io if you want to learn about incremental computing, and perhaps return here if you're interested in some implementation details.

But if you have just thought to yourself, "I'm not sure I want to read more than one article on this topic, so I'd rather not open a new tab", I will also summarize incremental computing before getting into the implementation.

Imagine we find ourselves working on a program to calculate the answer to something as difficult as “the ultimate question of life, the universe, and everything”. Typically, a question so grand will require a complex formula to solve. But in this alternate universe, we have been told that we can solve this by simply plugging in values for x and y into the formula: z = (x + y) * 42.

We sigh with relief as this problem is now simpler. But our relief is short-lived: we are told that the values of x and y each take up to a day to compute, because their formulas are so complex, and our program will have to wait.

Still, we're happy to wait and eventually, we receive our values, plug them into the formula, and go out to celebrate our new discovery.

Midway through our celebrations, we get interrupted and are told that the universe has received an update to x's formula, so we would need to recompute it, as well as the value of z.

Since only the value of x has changed and y hasn't, we know we can reuse the previously computed value of y and simply plug the new x value into our formula to get the result.

But while it may seem obvious to us that there's no need to recompute y because its formula has not changed, early models of computing were not so smart. They were more likely to recompute the values of all of z's inputs before recomputing z, even if an input had received no updates.

This mental model we have, where we know to only recompute what depends on either a changed formula (x in our example) or a changed input (z after x changed), is the concept of incremental computing. From Wikipedia,

Incremental computing is a software feature which, whenever a piece of data changes, attempts to save time by only recomputing those outputs which depend on the changed data.

I've used a trivial (and far-fetched) example, but this computing model generalises to different applications, ranging from spreadsheets to complex financial applications to rendering GUIs.

Modelling computation as a graph #

We can achieve incremental computing by modelling data as a directed acyclic graph, where each data element is a node in the graph, and there is an edge from a node A to node B if A is an input to B. That is, node B depends on node A.

We can represent our alternate universe example as the graph: 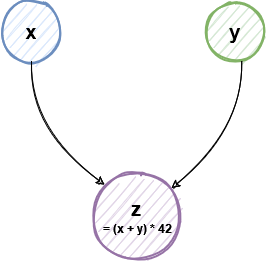 Now, let's use a less trivial example with a larger graph. Recall the quadratic formula for solving equations of the form ax2 + bx + c = 0:

We can represent this as a computation graph with three initial inputs, a, b, and c: 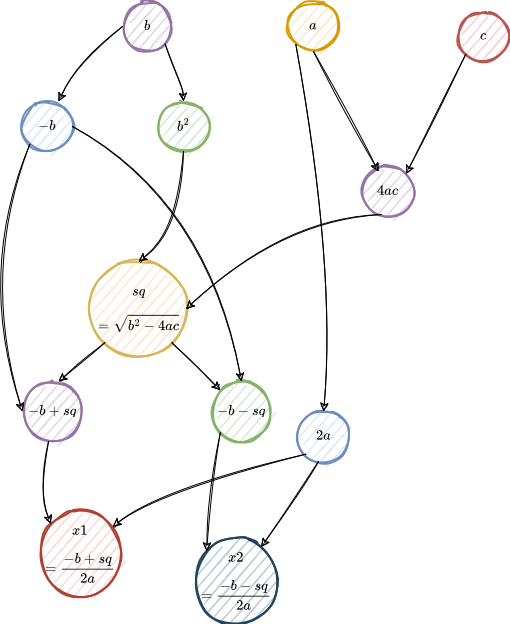 In this graph, there is an outgoing edge from a node if the node is an input to another node.

If any of the inputs, a, b, or c changes, we would need to recalculate the outputs, x1 and x2.

But if only b changes, we should recalculate only the nodes that depend on b either directly or indirectly, and we should calculate them in the right order: b^2 before sq, sq before -b + sq, and -b + sq before x1, for example.

We do not need to recalculate nodes 4ac and 2a, which do not depend on b.

From the structure of the graph, we can answer two questions:

Answering these questions, while they may seem obvious to us, are two major challenges in writing a program to perform incremental computations.

Thankfully, some smart people have gone before us and offered two solutions to these questions: dirty marking and topological sorting, which I will describe next.

With topological sorting, the program gives each node a height and uses this height and a minimum heap to answer our questions. It works as follows:

Topological sorting answers our questions in the following ways:

So far, I have described a form of incremental computing in which a program recomputes the values of all affected nodes in the graph to bring them up to date when an input changes.

Let's say we have a scenario where a node A is an input to many nodes, but we are only interested in the value of one of these nodes, B, at a time. In the model I have described, when node A changes, the program will recompute node B and any other nodes that depend on A, even though we don't care about them.

In a graph with complex formulas, performing these unnecessary computations could be costly.

Ideally, we would want to specify that a program should only perform computations that are necessary for node(s) we are interested in. We want computations to be demand-driven or lazy.

This requirement has led to the creation of libraries for demand-driven incremental computing, such as Adapton, which uses dirty marking and Incremental, which uses topological sorting as its algorithm.

They support lazy computations by allowing clients to observe nodes they're interested in. When an input changes and a client wants to bring observed nodes up to date, the programs only recompute nodes that affect the observed nodes.

The next section covers how you might build a program for demand-driven incremental computing.

Anchors is a C++ library for demand-driven incremental computing, inspired by the Rust library of the same name—yes, I got permission before using the name.

The rest of this section will cover the C++ implementation, which is based on Jane Street's Incremental library.

Two classes make up the core of Anchors: an Anchor class, which represents a node in the graph, and an Engine, which handles the logic. A simple example of their usage is this program below, which performs a simple addition:

An Anchor represents a node in the computation graph. As shown in the example above, you can create an Anchor with a value:

Or with a function that takes one or more input Anchor objects and a function to map from the inputs to an output value:

The class exposes getters and setters for these elements, as well as a compute(id) function to the Engine class. I'll describe how the Engine class derives the id it uses as the function argument in the next section.

When called, the compute(id) function invokes the updater function, passing the Anchor's dependencies as arguments to bring the Anchor's value up to date. It also sets the recompute id to id.

If the newly computed value differs from the old, the compute(id) function sets the change id of the Anchor to id.

The Engine is the brain of the Anchors library, through which clients interact with Anchor objects. Its state includes:

Its API exposes functions to observe() an Anchor, as well as get() and set() an Anchor's value.

The observe(anchor) function does the following:

You can update an Anchor's value using set(anchor, newValue) on the Engine class, which does the following:

The Engine class exposes a get(anchor) function to read an Anchors value. Anchors guarantees that reading an observed Anchor will return its most up-to-date value.

It achieves this through a process called stabilization, which involves the following:

When you call get(anchor) on any observed Anchor, the Engine class will run the stabilization process provided the recompute heap is not empty.

The examples in this article are trivial compared to real-world use cases of incremental computing, where nodes typically have many more inputs and more complex formulas. An example of how one can use an incremental computing library to value a portfolio in finance is here.

Anchors is still a work in progress and I intend to bring its algorithm closer to the hybrid one in the Rust library it is based on, eventually.

The hardest part of building this so far (conveniently ignoring the time I spent deciphering some C++ error messages) has been getting started: figuring out the API I wanted for the library and outlining the implementation details. If you're thinking of building something similar, I hope this post makes it a little easier for you.

Finally, part of my motivation for writing this post was to share the code and get feedback. So, if you go through the code and have any suggestions you think I'll find interesting, please let me know either through the form below or by creating a pull request.

Many thanks to Tobi Adeoye and Tofunmi Ogungbaigbe for providing feedback on an earlier draft of this article.